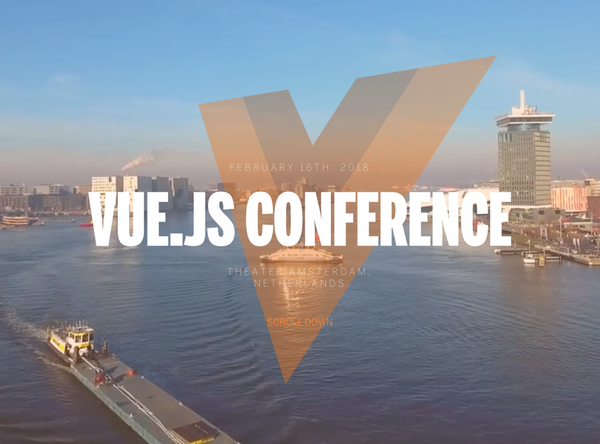 With almost 500 Vuejs Members in our Amsterdam Meetup Community, we have grown the largest and fastest growing Vue.js community on the planet. Our Meetup community has asked for years to run a conference and we are proud to announce our first ever conference.

We give back to the community and are proud of Gold Sponsor of Vue.js

Line-up (more to be announced)

The main man to have at the conference! No further introduction needed.

Sarah is an award-winning speaker, consultant, and staff writer at CSS-Tricks. Sarah is also the co-founder of Web Animation Workshops, with Val Head. She’s given a Frontend Masters workshop on Advanced SVG Animations, and is working on a book for O’Reilly on SVG Animations.

• Sébastien Chopin (Nuxt.js co-author)
Web developer since the age of 14. He has been using node.js for the last 6 years and since then he only writes JavaScript. He co-founded Nuxt.js to make universal application an easy task

• Alex Chopin (Nuxt.js co-author)
Consultant, Lead Developer JavaScript and co-founder of Nuxt.js. He is passionate at Web Development since 10 years. He loves building new projects and making them simple to use.

Eduardo is a Freelance in Front End Development who loves Open Source. He has been contributing to Open source since he started crafting applications. He maintains Vue.js related projects as Vue himself, vuefire and vue-router, but he sometimes helps out somewhere else, to make the web move forward.

• Roman Cuba (Codeship)
Roman is an active member of the Viennese developer community, in giving talks at various meetups, conferences and teaching classes at University.  Sharing knowledge and enabling others in writing great software, has always been a big motivator in pursuing this.

• Ives van Hoorne (Catawiki)
Ives is only 20 years old and already impressed many developers with his capabilities and work. Whilst still in school Ives already landed a job with the twice in a row winning Deloitte Fast50 company Catawiki. In his spare time he founded CodeSandbox, which is an online web application editor with Vue.js support which impressed Evan You.